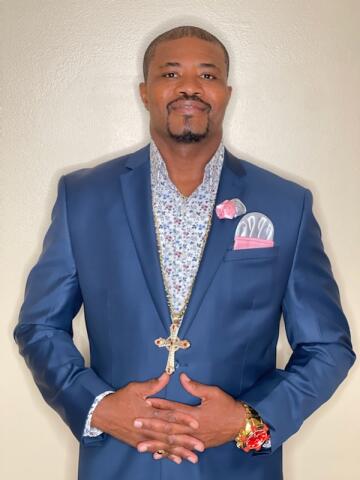 C.E.O/President
Alex-Eric Kofi Abrokwa-Clottey is an ordained international minister and founder of IN HIS PRESENCE
MINISTRIES INTERNATIONAL, COLUMBUS, OHIO. Apostle Abrokwa-Clottey started ministering
in Ghana West-Africa in the year 1993. Achievements of Apostle Alex-Eric Abrokwa-Clottey since he
arrived in the United States in October of 2002. By June of 2008, he had completed the LPN Program at
the Adult and Community Education in Columbus, Ohio. After graduation, Apostle Abrokwa-Clottey
began working within Nursing homes and has retired from working in the prison system in 2014.
Apostle Abrokwa-Clottey established Inprem Auto Sales in 2013. In March of 2014, He graduated from
the American Institute of Alternative Medicine (AIAM) School of Nursing as a Registered Nurse. In
2014, Apostle Abrokwa-Clottey was recognized in the winter quarter of the AIAM newsletter for
enhancing nursing education in the Columbus region. In partnership with the co-operate healthcare
industries, we have established free healthcare screening and health promotion, including free clothing
and fresh produce give-away to the community. In April 2015, Apostle Alex-Eric Abrokwa-Clottey
launched the INPREM HOLISTIC COMMUNITY RESOURCE CENTER, a comprehensive resource
center to provide Free Food, Free Clothing, an After-School Program Education, Job Readiness, and Free
Health Screening. A one-stop place for all your needs. On January 16, 2016, Apostle Abrokwa-Clottey
received an award from Men of Courage on their 3rd Annual Community Outreach Recognition Banquet
for serving the community. In 2020, he graduated from the University of Notre Dame, Mendoza College
of Business. During his study, he undertook courses such as Effective Grant Proposal Writing, Effective
Nonprofit Fundraising Strategies and Principles of Leading Transformational Nonprofits. He is an
Alumni of the City of Columbus Department of Neighborhood New American Leadership Academy
(NALA 2020 COHOLT).
Africa Projects

In 2017, Inprem Holistic Community Resource Center partnered with the “Love Train” in Ghana, West
Africa, and some regions in Kenya to provide privately donated emergency food, clothing, and
educational materials to school children. Inprem continued to advance its mission in the West African
region by encouraging female entrepreneurship in Cape Coast. Women were given assistance and training
to establish sustainable and marketable products and services to mitigate hunger and decrease poverty in
the region. In 2018, Inprem Holistic Community Resource Center spearheaded a project in the Eastern
Region of Ghana, West Africa. This project was developed to provide safe drinking water to residents in
the area. In addition, through his leadership and sponsorship, they built a four classroom building facility
for the community of Obotwere in the Eastern Region of Ghana. In 2021 Inprem launched the Inprem
Cashew Initiative to help grow and enlarge the production of cashew in Ghana.